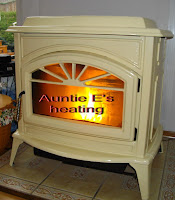 When stuff happens it is usually at and most unfortunate time and it raises my Blood Pressure. Here it was the first night of Chanukah, companies coming over. I needed to start the Latkes and get the table ready. When I notice it was awfully cold in the solarium. checking it out it was the Pellet stove! For some reason the stove had decided to stop working. So I tried to fix it, good clothes on and all. No such Luck! Called the repair man from last years repair, the igniter had gone bad. This time it was acting the same way and it hadn't been a year yet! Randy the repairman said he could not come until the 18th, the last night of Chanukah. Is this and omen? Eight crazy nights and no heat in the solarium, I got out the portable electric/oil heater. Yes I said Oil. Let see... eight nights the temple stay lit with the oil.... eight night my solarium will stay heated with oil, a coincidence ?
Posted by Auntie E at 7:46 AM