Safety on the Roads. 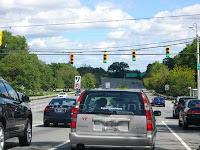 Wow, it's Thursday already! The week just flew by. Have been listening to the Hearings on Toyota.The two day hearings were very interesting to me. On Tuesday Mr James Lentz, President US Toyota Motor Sales(TMS), spoke about how he really knew nothing about the sudden accelerator problem until December 09. He has been with the company since 2005. James Lentz III served as executive vice president of TMS since 2006.Served as Toyota Brand Manager of Toyota Motor Corp., from June 1, 2005 to November 2007. Thought is was odd that he had been with the Toyota company for that long and still did not know about the Sticky pedal, as they called it,problem. His statement was profound "We lost sight of the customer". Explaining that they grew too fast, both by volume and product. Then went on to say they out grew their engineering resources. Mr Lentz stated they did not take in consideration that the customer would be double stacking the mats. These statements painted him and Toyota in a bad light. Was he blaming the customer for the accidents/problem? Sometimes it seemed so. Mr Lentz did say there are several changes in process now. Hoping that will satisfy the Toyota customer and the Government.
Wednesday we heard from Mr Akio Toyoda, son of founder as well as President of Toyota Motor Corp(Japan). We also hear from Mr Yoshini Imaba, President and CEO of Toyota North America Inc. It seemed that the problem first started in England and Europe around 2004. they thought it was a problem with the pedal and had to do with the right hand cars only. Said Cars are made differently for those countries. Toyota corporation never thought of notifying the US they thought they had fixed the problem. There is a big communication problem between Toyota Corp in Japan and the Toyota Divisions in the world. This they are working on making better as of today.
It amazes me that these sudden unexplained acceleration can be happening since 2001 and none of the Toyota Company represented knew about it. Some of the letters the board members had dated back to 2001. All these letters were from Americans who had been experiencing the sudden acceleration problem. They had been taking their cars to the dealership for repairs. The dealership found nothing wrong and blamed it on the drivers style of driving. A Letter was sent to some of these customers from the corporation stating that this just can not happen, it is impossible, the brake system would over ride the accelerator. We all know now that their belief was wrong. This is a very serious problem, in my opinion.Toyota will suffer greatly because of this. They might even fall as other auto companies have.

For me, Every time I see a Toyota or Lexus I tense up. Will it stop, will it accelerate and will the driver know what to do to stop it? That is why, in my opinion, it is important to take all the cars off the road until the problem is found and fixed. I realize that not all cars have this problem however, do you know when it could happen to you and could you risk your life and families on a probability of numbers. A family of four died due to this problem, and now we are holding hearings. Many more have died previously and we will never know have many, due to the cause was deemed, speeding. There must be a common factor in all these cars, Toyota must find it. In my mind I really think it is an ETCS, electronic throttle control system, problem. Since it started about that time they began installing it. The current problem affects all driver no matter what type of car you drive. We all are at risk.
Posted by Auntie E at 7:49 AM