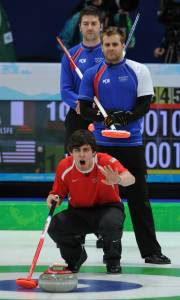 Oh yes I was excited, both our curling teams won yesterday. First off the Men's team benched John Shuster, good move. He missed so many openings for a score, it was frustrating. In 4 games he had no wins. They put in Chris Plys(shown in red in photo on right) a 22 year old bartender who loves curling. Member of the Duluth Curling Club in Minnesota. He was great, had control of the rock and he worked well as a team member. The US Men Curling team scored a win. Great going Team USA. 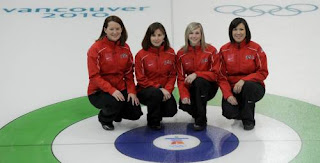 For the USA women curling team. Finally they played a winning game. It was exciting to watch, I think they are now getting it together. Skip Debbie McCormick
(Shown on the left side on photo) seems to be placing the rock where she wants to. Looks like she is back on her game. They are playing more aggressively, the USA Women Curling team will have to continue being aggressive to make the finals in my opinion.

Photos courtesy of curlingrock.net.
Posted by Auntie E at 10:15 AM